As many in the US must have noticed by now, the economy is pretty bad. The job market is also rather dismal, which has had an impact on me. It probably wasn't a very good idea to graduate last December, as I have been unemployed since then.

Fortunately my luck turned at the beginning of May when, despite a rather terrible interview (on my part), I was picked along with three others to do a very exclusive internship in London. A month later my bags were packed and I was on my way to Europe. My first day on the job is next Monday, and I'm rather looking forward to it.

This also meant having to leave my life in the US behind: my dogs, my apartment, and my cars. The latter, for the purpose of this blog, was the most painful one to leave behind. So until I figure out if I'm staying in London, moving back to the US, or moving to another part of the world altogether (I hear Singapore is nice, and the job market is good), I'm putting the cars in storage. I've already received shipping quotes for the cars to most of the world (~$1000 a piece), so I guess we'll have to see what happens.

In the meanwhile for obvious reasons I won't be working on either of my cars. Just know this: I will be back to work on them, and will do so properly next time (with money and a garage).

Here's a video (in HD) of how I saved money by putting them both in one storage container. Press full screen if the banner on the right cuts over the video, or click the video a few times till Youtube opens.

Till next time! If anyone in London is looking for someone to help out with their British classic on the weekends, drop me a line!


Like this video? Check out my other video with more details on the MGB and XJS you just saw.
Posted by Arun Luykx at 4:30 AM 1 comment:

You would be right to assume that I have somewhat neglected the 'B' this year. Unfortunately, my XJS has been keeping me (and my wallet) rather busy. And as I have to drive it to work every day, I have to keep it running. The XJS was at a tipping point when I got it, but I'm pleased to announce that I think I've pushed it away from the brink of inoperability. A strong engine and accomodating transmission allowed me replace pretty much every service part: hoses, electrical components, all 6 (!!) shocks (of which 4 McPhearson...), ball joints, fluids, brakes, lenses, etc etc etc. It's been a real pain in the ass.

Things are finally clearing up a bit for me, in that I am graduating (just 3 weeks left) and about to enter the world of unemployment! This means that I'll have plenty of time to work on the B. I don't actually want to be unemployed, so if you're reading this and need a management consultant or electrical engineer (I'm two in one!) please visit my website and take a look at my resume: www.arunluykx.com.

Anyway, back to the B. Obviously, between my thesis and that blasted Jag, I haven't had any time to do anything recently. So here are some pictures of me refurbishing the radiator last summer: 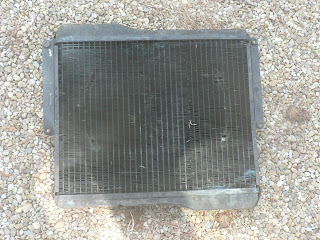 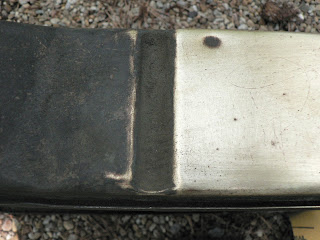 Above: Sanding down the top of the radiator revealed a painted over brass top. Using brass polish I was able to really clean things up and make it shine. 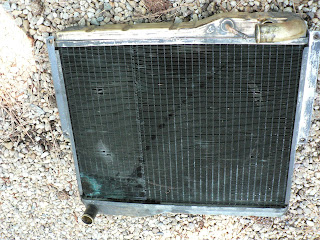 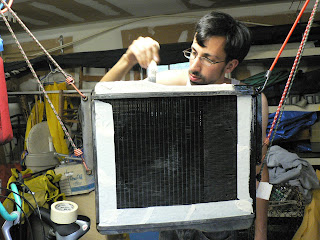 I covered up the rest of the radiator with masking tape and painted the non-brass surfaces with black POR-15 paint. I should note that POR-15 is truly amazing paint. I've also used it on the front grille of the B. 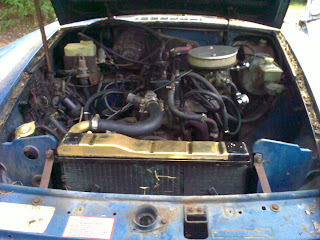 Above: The final result. Unfortunately this terrible cell-phone picture does not do the details justice, so I'll post more pictures during my unemployment. I also replaced the hoses during this, and ran a coolant flush through the radiator to remove some junk.
Posted by Arun Luykx at 10:01 AM 1 comment:

Finally got the wheel off!!!

Finally, after MONTHS of trying, I was able to get that horrible Leyland style rubber steering wheel off! Well, it wasn't me as much as it was a colleague of mine who also happens to have an interest in classic cars. 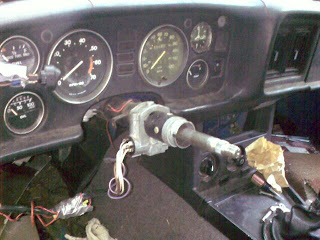 I tried various tools: hub pullers, hammers, tons of penetrating oil, a puller I made like the one from Moss (which sells for $50), etc, but all to no avail! In fact, conventional wheel pullers will not work with this car. Rather, the remedy was simply persistent pushing and pulling the wheel from side to side. Just keep working the wheel gently. Don't use a hammer (I managed to damage the threads doing this). It took about half an hour, but in the end the damned thing came off! Despite drenching the thing in Deep Creek, hardly any of the oil had actually gone down far enough to actually loosen up the splines.

I can't take credit for the work, I'm not patient enough to do anything like that. All credit should be directed to my colleague and future car collector, Matthias (see picture). 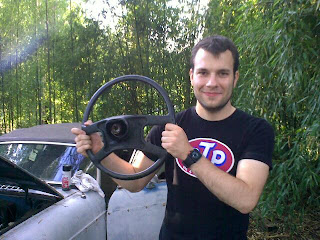 So basically: trying to take the steering wheel off? Forget about buying anything! Nothing works. Trust me, I've tried it all. I even bent the old wheel in the process.
Posted by Arun Luykx at 3:09 PM

The 100 feet of snow we had this winter wasn't enough to collapse the old bird. However, when I went to take a look at it today I realised my first task was going to be a spot of gardening. Here are the before and after photos: 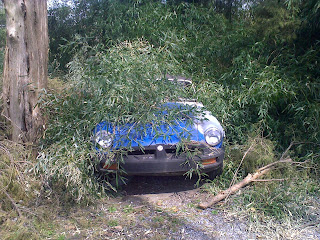 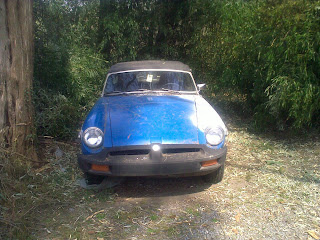 There was A LOT of bamboo all over the place. Amazingly the roof was still intact, despite numerous branches having fallen on it. The roof was not intact after I accidentally poked through it while removing a branch.

University Motors is Back!!!

John Twist recently posted that University Motors is back in business:

As I pondered my future, I could not escape the undeniable fact: MG is my destiny. We are now re-awakening University Motors. 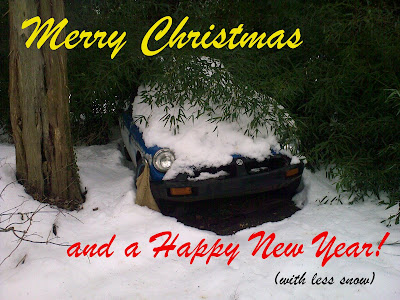 Posted by Arun Luykx at 3:36 PM No comments: 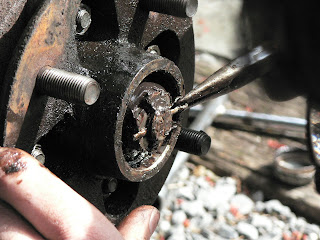 I strongly believe in the value of fudging values from time to time. 5 ft/lbs? Finger tight! 0.05mm tolerance? Finger tight! 32 PSI? Yup, finger tight!! Please note that I am not an accountant, and do not work in the finance industry (where a lot of 'value fudging' goes on as well, I imagine...).

Unfortunately this does not always work. Bearings, for example, are an example of one of these situations. I learned that this week when the brakes on my XJS stopped working every time I made a hard left or right.

I recently changed the bearings on the XJS, but followed my usual method of tightening the end nut: finger tight plus a turn of the wrench. Generally that's good enough (as it seems to be for the MG). Tightening too much leads to premature wear of the bearings, and that lovely grinding noise you sometimes hear on old cars. Too loose has never been much of a problem, so I didn't think too much of it.

Well, I was wrong. Turns out the XJS needs a full 25 ft/lbs on the end nut (as pictured above, on the MGB, before pin removal), backed off one flat (and more if necessary to fit the pin back in). After adjusting this the brakes returned to normal, and high-speed driving stabilised a bit. Turns out the nut was loose enough to let the rotors move around enough to push back the brake pads, but only when the wheels were turning. So really the brakes were working fine, it's just that they had to be reset each time I made a turn.

So:
Here are my general bearings instructions (for the MGB and most cars that aren't Jaguars):

Looking for some help?

This website is mainly being written to help other MG enthusiasts do things on their cars. The car this blog is on is a 1977 MGB kept in Maryland (where it has been most of its life).

Look under 'Discussed Topics' below to find all entries on a specific topic.

A bullet in green at the beginning of each article details the work being discussed in that entry. Purple indicates what was resolved doing this.

Click on the 'My MGB' logo on top of the page to see the latest entries.

Don't see what you're looking for? Leave comments and questions if you need more help, or follow a link from the 'Technical info' section below to other enthusiast sites. Alternatively you could also send me a message.

Arun Luykx hates mechanics, almost as much as he hates hatch-backs and diesel cars. For this reason he now works on cars on his own. Naturally, having no formal mechanical training, this often leads to complications. With this blog he tries to help others avoid the same problems he encountered. His two cars, a 1977 MGB and a 1994 Jaguar XJS, keep him more than busy on the weekends.

Arun Luykx
Fast cars, women, wealth, and respect. Arun has none of it. He does hold a degree in Electrical Engineering from the University of Maryland at College Park, and two cars (a 94 Jaguar XJS and a 77 MG-B).